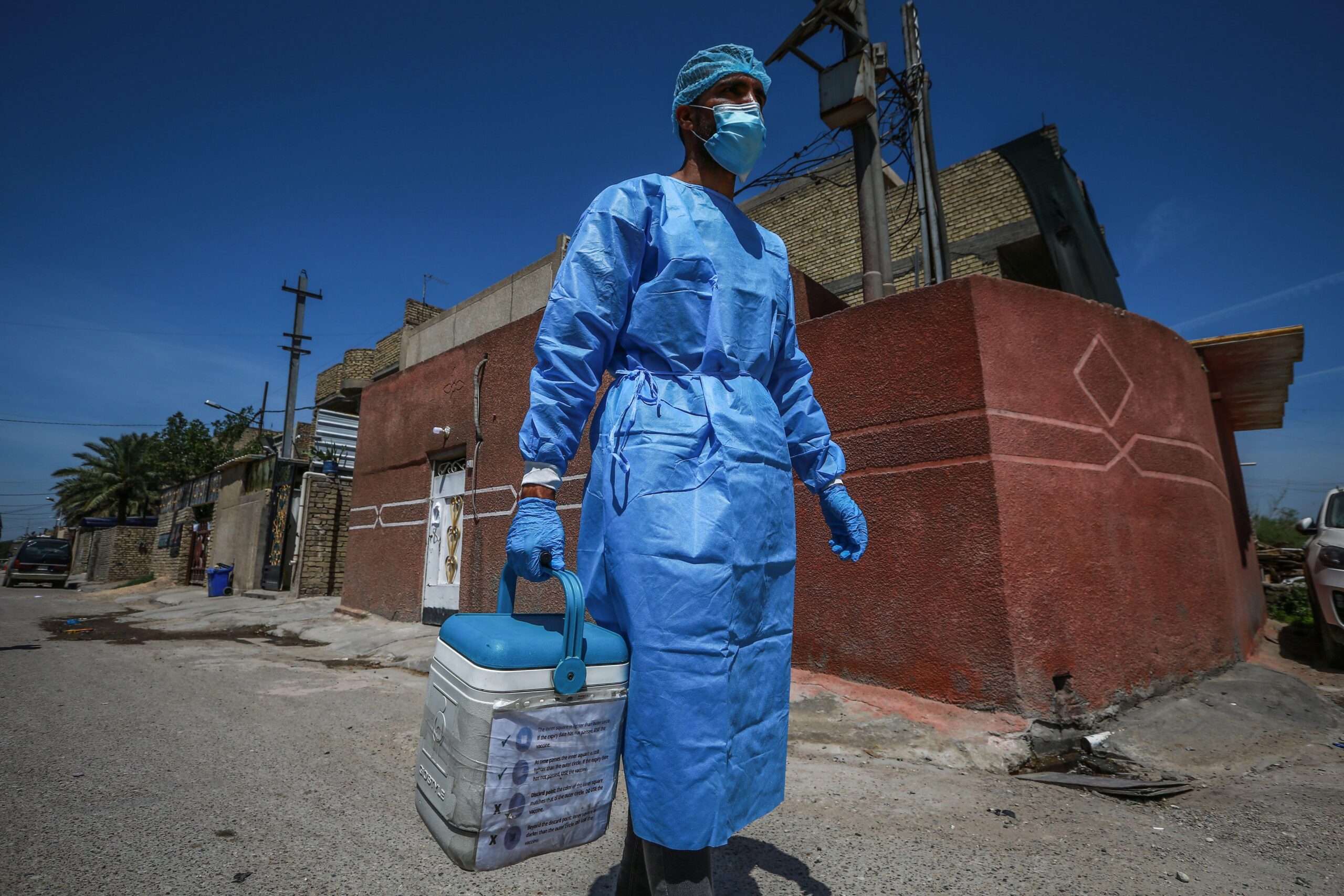 In July of this year, a fire tore through the COVID-19 isolation ward of Iraq’s al-Hussein Teaching Hospital in the city of Nasiriyah. At least 64 people were killed and dozens more injured, with the cause of the accident still disputed. Initial police reports suggest that the trigger was the explosion of an oxygen tank, yet an electric short circuit was also suggested. Regardless of the cause, this hospital fire is not without precedent. It follows the April fire at Ibn al-Khatib hospital in Baghdad as a result of incorrect storage of oxygen cylinders which took at least 82 lives.

These hospital fires are a small snapshot of broader systematic issues in Iraq’s health system. Since Iraq’s first case of COVID-19 in February 2020, the COVID-19 situation has rapidly deteriorated. The country is currently experiencing more than 2,000 infections on average per day, with over 22,000 deaths thus far. Despite the prevalence of cases, less than 10% of the population has been vaccinated.

One key issue contributing to Iraq’s healthcare woes are medical and healthcare infrastructure shortages. While there were 1.9 hospital beds per 1000 Iraqis in 1980, this patient-to-bed ratio has today dropped to 1.3 per 1000 Iraqis, making this ratio smaller compared to any other countries in the Middle East. In addition, the substandard quality of care and extensive wait times in the public healthcare system means that many patients prefer to go through the expense of the private sector. Alternately, many Iraqis seek medical care in other countries such as India, Iran, Jordan, Lebanon, and Turkey.

Within the context of COVID-19, healthcare issues are compounded by the mistreatment of medical staff. Belief in conspiracy theories is widespread among citizens, such as the virus is a hoax or a political conspiracy. This is due to a lack of public trust in the Iraqi government arising from widespread government corruption and authoritarian rule. In fact, according to the Arab Barometer, Iraqis possess low rates of trust in political institutions like parliament (13%), the judiciary (38%), and political parties (6%).

Consequently, many medical workers have faced verbal and physical abuse from patients who refuse to be tested or vaccinated. Many Iraqis ignore advice about the need to socially distance, wash hands, wear masks, and avoid gatherings. The media has also played a role, where even before the pandemic, doctors have been depicted as scapegoats for Iraq’s healthcare problems.  This has been used to shift the blame away from the government’s mismanagement of the Iraqi healthcare sector. Additionally, the lack of adequate PPE and security for doctors by the government has increased the prevalence of infections and deaths among doctors. This has resulted in doctors fleeing abroad, with currently 20,000 documented doctors living outside of Iraq.

So how did Iraq get here?

While the Iraqi healthcare system was considered the envy of the Middle East region in the 1960s and 1970s, its demise has become painfully apparent over the last three decades. Key contributing factors have included decades of war, United Nations sanctions, sectarian conflict as well as the rise of the so-called Islamic State.

In particular, the fall of Iraq’s health system began after the Iraqi invasion of Kuwait in 1990. The imposition of a trade embargo on Iraq by the United Nations Security Council led to the insufficient medical supplies, as well as the deaths of thousands of Iraqis from basic medical conditions such as diarrhoea. During this era, some estimate that funding of healthcare in Iraq decreased as much as 90% between 1993 and 2003.

Iraq’s healthcare sector further deteriorated after the U.S.-led invasion of Iraq in 2003. Bribery, nepotism, and theft have snowballed since the invasion, even when the government has pledged more money into the healthcare sector. For example, corruption in the Health Ministry is salient through embezzlement of funds and the selling of medicine on the black market. In fact, over the past decade, Iraq’s central government spent less per capita on healthcare compared to less wealthy neighbours such as Jordan and Lebanon. This dire climate led to the resignation of the former Iraqi Health Minister in September 2019.

In response to the healthcare challenges of COVID-19, the World Health Organisation (WHO) has been fundamental in building Iraq’s healthcare capacity. Noting the need for intensive care and critical care capacity-building in Iraq, WHO have provided training for doctors and nurses. WHO has also provided essential medical supplies to the Health Ministry, such as PPE, medical equipment, and medical furniture. However, as noted, the prevalence of government corruption suggests that it is debatable whether these resources will reach the intended parties.

While measures implemented by WHO are a step in the right direction, the reversal of misinformation about COVID-19 also needs to be addressed. Despite the high level of public mistrust of the Iraqi government, alternate routes of educating the population against misinformation are possible. Religious leaders could have a role to play. For instance,  an uptake in vaccination numbers occurred when a popular Islamic cleric was vaccinated.

Audits on issues of healthcare mismanagement are also necessary. One step in the right direction is the Prime Minister’s request for a full investigation into the July hospital fire, as well as for the suspension and arrest of the hospital’s health directors.

If there is anything to take away from the past 18 months of life under the shadow of COVID-19 in Iraq, it is that government incompetence and mistrust have led to an overwhelmingly negative response to the crisis. Even if vaccination rates increase and even if Iraq eventually manages to eradicate the virus, systematic forces of corruption coupled with inadequate health infrastructure and equipment mean that Iraq’s healthcare system will continue to be a concern beyond the pandemic.

Afeeya Akhand is based in Sydney, Australia where she is studying a Master of International Security at the University of Sydney. She has experience in foreign policy and government through prior roles in the Australian Department of Defence as well as the consultancy sector.